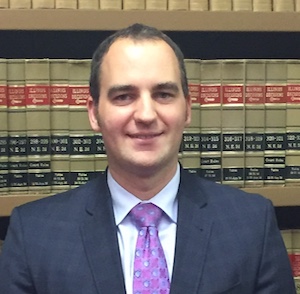 Aaron S. Galloway was born in Flora, Illinois and graduated from Western Illinois University with a B.S. in Psychology and B.A. in Economics in 2007.  Aaron was named the Outstanding Senior for the Economics program and the Economics Department Scholar. Aaron attended Northern Illinois University College of Law and was Assistant Editors on its Law Review.  In 2010, Aaron graduated Magna Cum Laude and was immediately deployed with the Illinois National Guard to serve in Egypt as a part of the Multinational Force and Observers.  Upon his return in 2011, Aaron was admitted to the bar and practiced in McLean County. Aaron joined the Fellheimer Law Firm, Ltd in 2012.