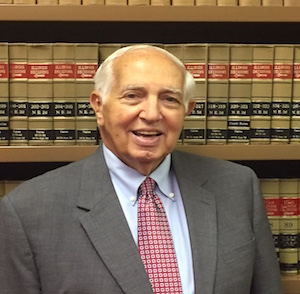 Ronald K. Fellheimer was born in Pontiac, Illinois and graduated from Pontiac Township High School in 1956.  After graduating from the University of Illinois at Urbana-Champaign with a B.S. in Finance, he graduated from John Marshall Law School before joining the United States Army.  Ronnie began practicing law in 1964 with his father, August Fellheimer.  His early career included time as an assistant Livingston County State’s Attorney and the City Attorney for Pontiac.  His work as a prosecutor in combination with his private practice have allowed him to handle almost every type of case imaginable over his career. Ronnie was named a Distinguished Counselor in 2014 by the Illinois State Bar Association for his fifty years in the practice of law.

Ronnie served on the Pontiac Bancorp, Inc. and Bank of Pontiac Boards of Directors for twenty-seven years.  He was Chairman of both Boards from 1993 to 2009.  From 1973 to 2009, Ronnie served as Clerk for Pontiac Township, Livingston County.  Ronnie also represented his ward on the Pontiac City Council from 1965 to 1969.  He also served as a trustee at Pontiac Elks Lodge 1019, where he has been a member since he returned to Pontiac and began practicing law.  He has been a long-time member of the Livingston County Bar Association where he served in various leadership roles over his career including President.  He has and continues to serve as a Trustee of the J. Paul Yost Trust.